Using the hardware USART with BoostC and a PIC

This post looks at what is needed to get a serial connectiong working with BoostC using a PIC with a hardware USART. A later post will cover the BoostC software implementation, when I have finished figuring it out.

By the end of this post there will be a PIC uC talking to Hyperterminal on the PC using less than 50 lines of code.

There main advantage to using this library to implement serial communication is that it sets up all registers and control bits for you (including TRIS for the TX and RX pins). This means limited digging around in the datasheet, you can code without worrying about the underlying hardware.

However it may be a disadvantage too. The limited control over the hardware means that certain things are fixed. For example, 8-bit transmission is the default. It might be possible to change these by modifying the PIC registers directly but I haven’t tried this yet. Leave a comment if you know it works!

A few things are necessary to make this work. Firstly a PIC with hardware USART support, in this post I’ll be using the PIC 18F1320 as an example. The hardware USART is listed under “peripherals” in datasheets.

In order to talk to a PC we also need some form of level convertor from logic levels (+5v/0v) to RS-232 (maximum voltage range +12/-12v).  I use a MAX232 breakout board that I built myself, but this board or this board from Sparkfun should work just fine.

The purpose of this post isn’t to discuss connectivity, but briefly the PIC TX and RX pins need to be connected to the level shifter, as do +5v and GND. The serial pins on the PIC can be found in diagrams in the datasheet. Remember which pins they are as they are needed later.

The BoostC library is incredibly easy to use but there are a three values to work out first. Remember the choices so they can be used in the code later.

The first value is bit_time, which is the number of CPU instruction cycles per bit (note that the header file says this is used by the software USART, but code will not compile without it so it is included here for reference).

Take the clock speed in hz, divide by four and then divide by your desired bit rate. I recommend starting slow (e.g. 1200 baud) and trying to faster when it works, so for an 8Mhz clock and 1200 baud we get:

The second thing to work out is whether we need high or low speed mode and what divisor to use. Fortunately these are fairly simple as they are explained in the datasheet.

If using a slow baud rate with a fast oscillator, the datasheet recommends using the high baud rate generator. The datasheet also suggests that it might help to reduce baud rate error. Enabling this means using a mode of 1.

For this example I used the 8Mhz internal oscillator (fairly low speed) and did not use the high speed generator, so I set mode to 0.

Finding the divisor number is as easy as reading the datasheet to find the “SPBRG value”. There are tables with the combinations of oscillator speed and baud rate showing the correct value. Be careful to use the correct table for whether you plan to work with the high or low speed generator!

Below is example code which shows how to use the information described above. It was adapted from the file serial_test.c which comes with BoostC.

For some reason the BoostC examples use the hexadecimal locations of the correct registers. It is possible to use their names instead, e.g. TRISB/LATB/PORTB as I have below.

In the code below it is necessary to change 4 things:

Setting up a PC client

As I mentioned above the settings for serial communication are fixed by the library.  You will need to set 1200 bits per second, 8 data bits, no parity, 1 stop bit and Xon/Xoff flow control.  This is often shortened to “1200 8-N-1”.

If you use Hyperterminal, all settings are on the properties page for the relevant serial port.

And finally, some proof that it actually works!  If you find this post useful, or you need further help, please leave a comment below. 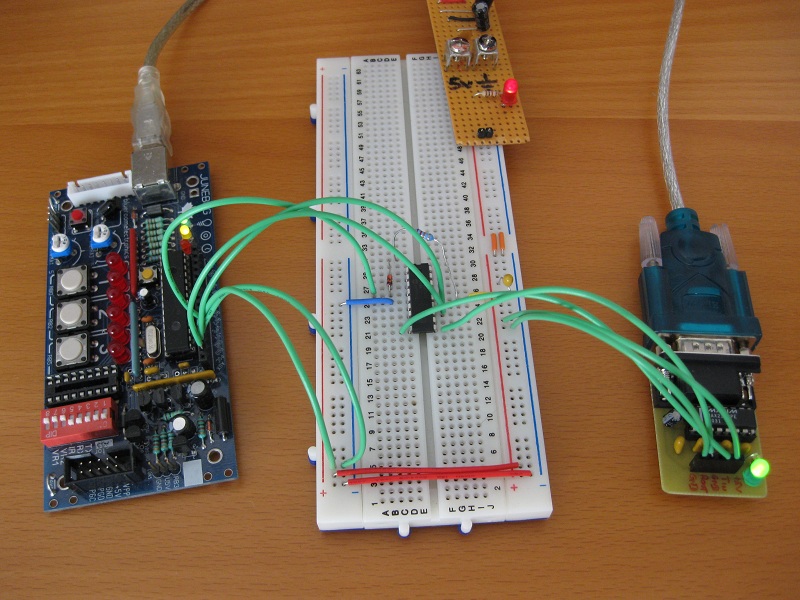 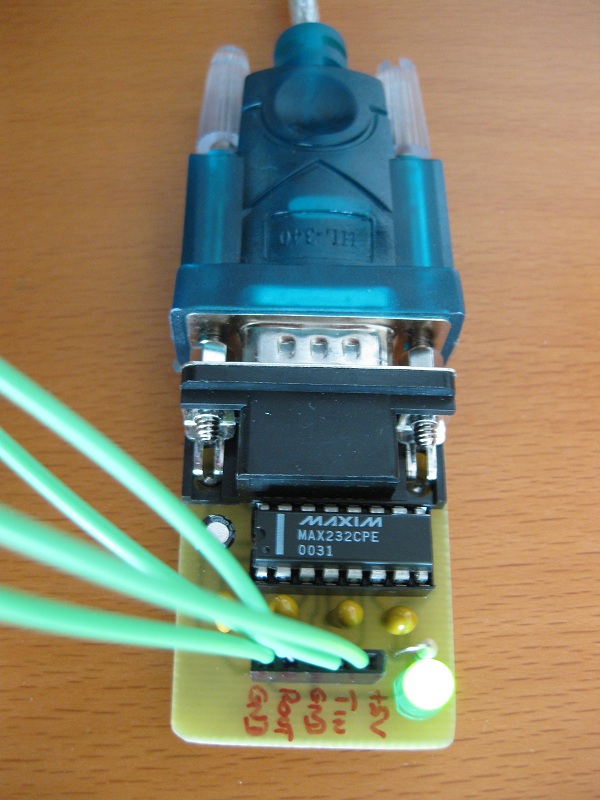 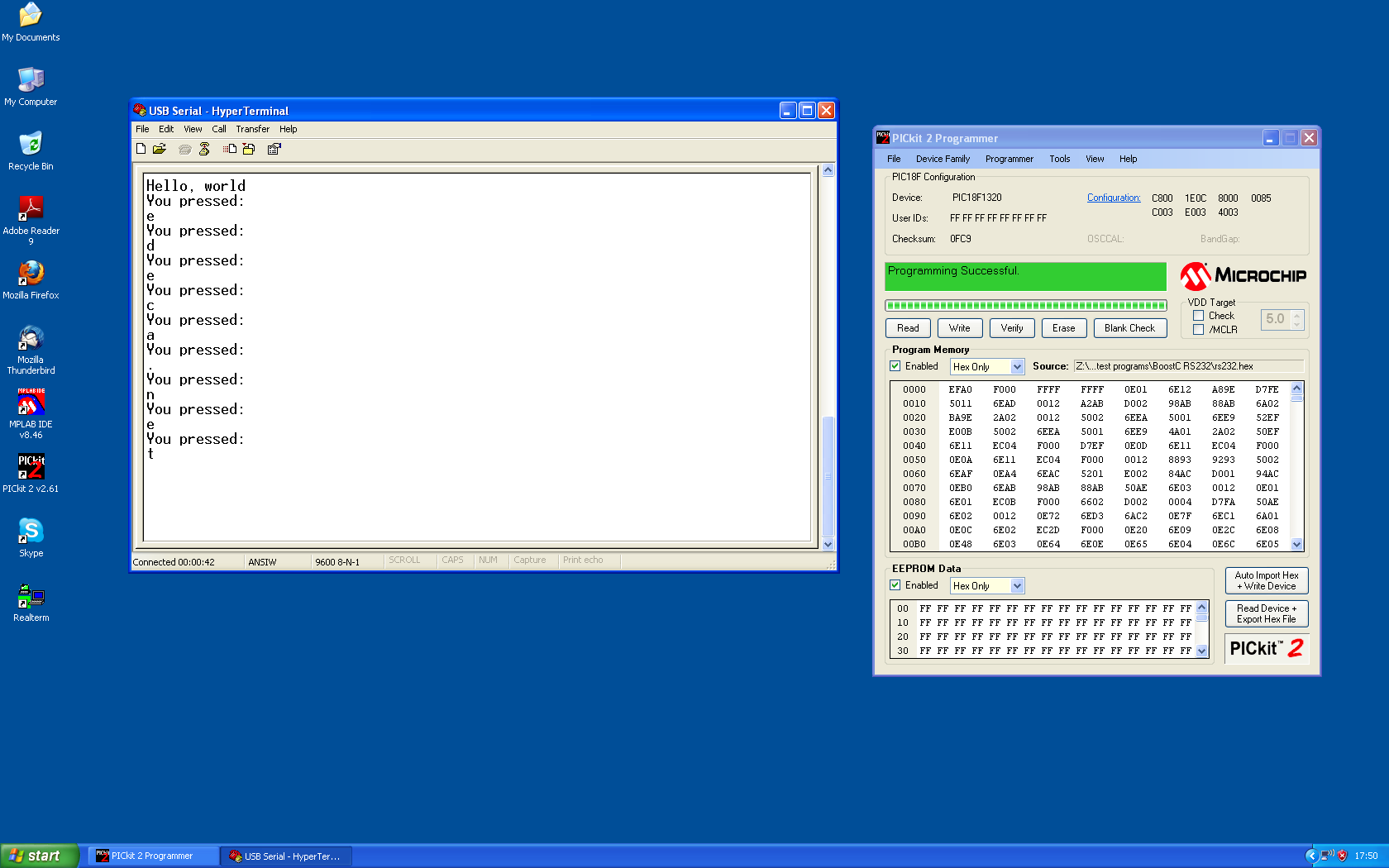 Mike (K8LH) has posted a great little utility on the Microchip forums that can help work out the correct values, if you don’t fancy digging through datasheets.